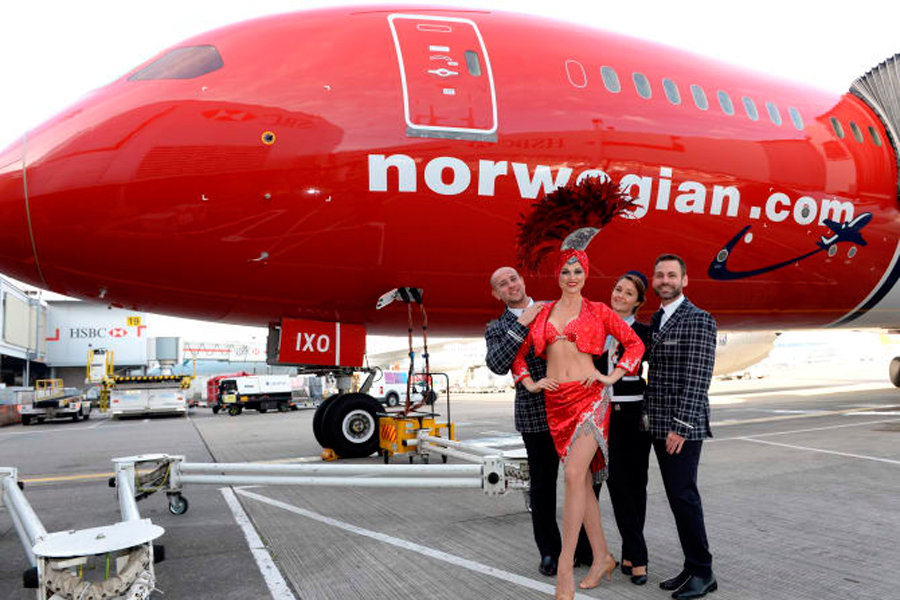 Low-cost airline Norwegian has today launched the UK’s direct flight to Las Vegas, as the carrier continues its rapid growth in Britain.

From today, two weekly flights will depart Gatwick on a Monday and Thursday, perfect for a weekend break. All flights will be operated by the airline’s Boeing 787 Dreamliner aircraft which feature two cabins – Premium and Economy.

Las Vegas is Norwegian’s third long-haul route to launch from London Gatwick this year alone, alongside Oakland – San Francisco and Boston that took-off earlier this year.

“We are pleased to launch the UK’s cheapest direct route to Las Vegas. Our great value fares offer more choice and flexibility for the British public wanting to travel to Nevada on any budget. This year has been our busiest yet at Gatwick with the addition of three new direct transatlantic routes, as well as extra frequency and capacity on our existing network. We look forward to welcoming more passengers on board our low-cost, high quality flights to the U.S.”

“We are honoured to expand our valued partnership with Norwegian Airlines in providing outstanding options for travellers in the UK, and throughout Europe, to experience everything Las Vegas has to offer,” said Rossi Ralenkotter, president and CEO of the Las Vegas Convention and Visitors Authority. “Las Vegas welcomed a record-breaking 42.3 million visitors in 2015, with the UK representing our largest overseas market, and we look forward to welcoming additional British travellers to the destination with the addition of this convenient nonstop service.”

“Las Vegas has long been a popular destination with Gatwick’s passengers. This, the newest long-haul service from Gatwick, will increase the choice of flights available to those travelling to one of the USA’s most exciting cities. Norwegian’s route joins more than 50 other long haul services from the airport, including most recently new routes to China, Peru, Canada, Costa Rica, Nigeria, South Africa as well as the United States.”

Norwegian now serves over 40 business and leisure winter destinations from London Gatwick, Manchester, Edinburgh and Birmingham, with more than 969 000 seats available from the UK throughout winter.